Du er her: ingenioer.au.dk Samarbejde Projects A polystyrene box and a broomstick

A polystyrene box and a broomstick

“It’s kept me awake at night”

Claus Melvad is the man behind perhaps the world’s most comprehensive and innovative portfolio of climate research technology.

Working closely with students and climate researchers from Danish universities, Claus has managed to fill in some essential pieces of the jigsaw puzzle of global warming.

The seriousness of the problem has been of great personal importance to him.

Professor (Docent) Claus Melvad had come to Aarhus University after a long career in industry. He had a dream of teaching and immersing himself more in what most would consider an unlikely interest – namely exploring underwater.

He managed to instil a fascination for mechatronics in his students on his very first semester, and shortly afterwards they signed up for an international university competition to design underwater robots.

Claus' team returned home in triumph, and with a lot of media coverage. He was then contacted by research colleagues at the Arctic Research Centre at Aarhus University.

The climate researchers wanted to monitor the development of the algae that grow under the sea ice in our northern hemisphere, and they had an idea that Claus Melvad might be able to help their research.

"I think that was where I realised that I could make a significant difference with my specialist knowledge as an engineer, and for me it has always been a huge privilege to work with talented researchers. Ice algae are important because they constitute the vital primary production in the Arctic, but at that time we lacked the technology to move around under the ice and take good measurements. Norwegian researchers had published a solution using a flamingo crate to pack their sensor equipment so that it could float. The flamingo crate was then pushed around under the ice with a broom, and they extended the broomstick with another broomstick and duct tape, so they could expand the range of their underwater reach. It was all very low-tech, and clearly there were limitations," says Claus Melvad.

He therefore engaged a group of students to develop an underwater robot that not only could measure algae growth under the ice, but also had an innovative, light-based positioning system.

Claus Melvad's spectacular career in engineering took off here. He worked more closely with climate researchers. He was allowed into their engine room and he decided to get himself scientific insight into their challenges. This led to several ideas and new technology-development projects, and Claus engaged his students in the work.

"I was moved at a very personal level. I’ve been concerned about how serious the climate change problems are for some time. It’s often kept me awake at night. I think that I’ve channelled the powerlessness I felt into a very strong commitment to my work. I see it as my task to develop technology that can enable us to understand and limit the consequences of global warming. Of course, this has also affected the many groups of talented students who’ve worked on my projects. They’ve been driven by strong motivation that has also resulted in remarkably good study performances," he says.

Together with his students, Claus Melvad has managed to make a clear mark on the results of international climate research in recent years.

Together, they have helped researchers carry out several dangerous, difficult and time-consuming tasks on polar expeditions. They have invented drones that can drill cores out of icebergs, autonomous boats that can measure the salt content of the sea, underwater robots that can take deep-water 3D scans of icebergs, and autonomous buoys that can profile freshwater additions from glaciers. Just to mention but a few projects.

“If we really want to understand the consequences of global warming, we need to know what’s going on in the Arctic Ocean. We know that temperatures are rising. We know that the ice is melting. But we don’t know much about what happens when freshwater mixes with seawater. The researchers have a blind spot, and this is a very big problem, because even small fluctuations in the salt balance can affect the fine mechanisms that regulate maritime currents and thus our entire ecosystem and the global climate. I feel a huge responsibility to help research with what I’m actually quite good at," says Claus Melvad.

Claus Melvad is good at getting ideas. He is good at solving problems, and he can spot possibilities at the interface between electronics, software and mechanics with awesome precision. He is also ambitious on his own behalf, but perhaps especially for his students.

"They’re working on something that’s meaningful for them and important in a wider perspective. Their results will be published openly so that others can continue to build on them. I’d like to teach them to think creatively, aim high, have the courage to fail and push the limits of what is possible. This is perhaps the most important recipe for innovation," he says.

" You stop counting in hours. This is something close to my heart. Global carbon emissions are moving in the wrong direction, and I see the consequences coming at an unprecedented pace"

During his employment at Aarhus University, Claus Melvad has spent a great deal of his waking hours developing technology to support climate researchers in their work. His students have together spent more than 120,000 hours at a market value of more than DKK 42 million on the various projects. Moreover, there have been a number of successful polar expeditions.

"You stop counting in hours. This is something close to my heart. Global carbon emissions are moving in the wrong direction, and I see the consequences coming at an unprecedented pace. Explaining why things are moving so quickly and developing climate models to prepare us for the future require considerable research efforts, so that we’re not taken unawares," he says. 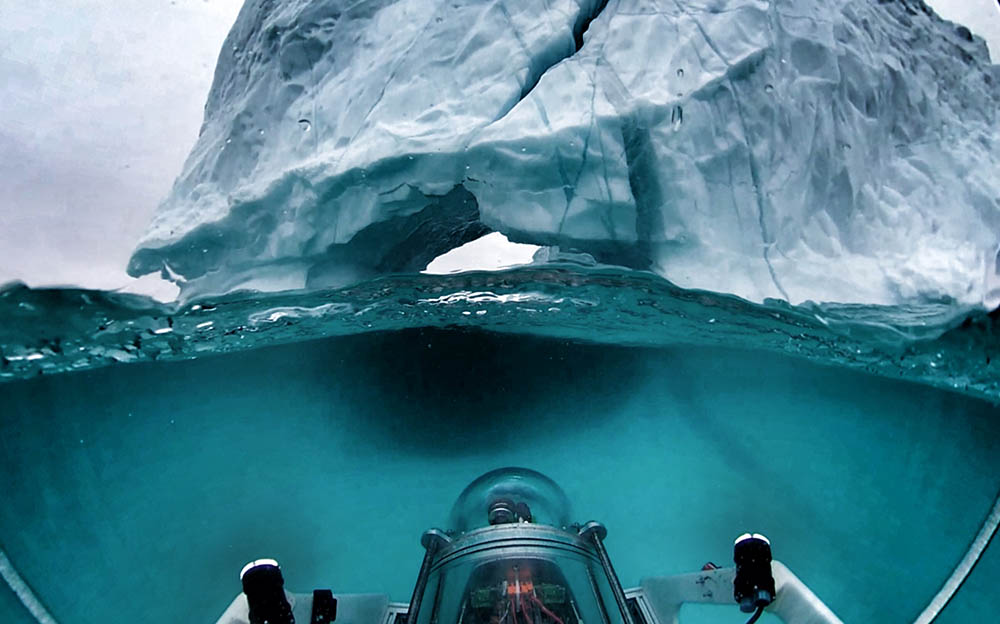 The underwater robot North Rov is one of Claus Melvad’s inventions. It can completely 3D scan an iceberg below the ocean surface. In another project his students have developed a device that makes it possible to collect water samples from the Arctic Ocean at depths of 300 metres.