New professor to ‘smarten up’ farming

Senior researcher Claus Grøn Sørensen is a new professor at the Department of Engineering at Aarhus University, where he is continuing his research on Operations Management for the intelligent agriculture of the future.

Modern agriculture is on the threshold of a paradigm shift, in which digital technologies and intelligent IT solutions will raise the sector to a new level. It is about more than just self-driving tractors or automatic weed control. It is the complete digitisation of all parts of the agricultural sector, where machines, sensors and devices work together and exchange data in autonomous production.

This is not a pipe-dream for the future. We already have almost all the technology.

However, it takes time to adopt and exploit the technology optimally, not least in relation to using the vast amounts of data for real value creation.

Data is the foundation for advanced optimisation and management that can increase the efficiency of production and ascertain the sustainability of the technologies (environmental impact, financial aspects, etc.). This is the background for research by Claus Grøn Sørensen, a new professor at the Department of Engineering, Aarhus University.

Since the beginning of the 1990s, he has worked on analysing and optimising production systems in the agricultural sector and its supply chains. And over the past decade in particular, he has conducted research into a strong interconnection between information technology and intelligent, optimised operations in an ever more digital agriculture.

He has seen the enormous development with his own eyes, and he can see great perspectives in the intelligent agriculture of the future:

"70-80 per cent of the agricultural technologies sold throughout the world have built-in intelligent systems. However, only 20-30 per cent actually use these systems. New technologies can be difficult to use, and it can be difficult to see the benefits of intelligent technologies. What can you use them for? The industry has realised that it is not enough just to put a lot of advanced technology into products and expect that efficiency improvements will come by themselves. There is still a need to assess the need for resources, find bottlenecks, optimise the use of the technologies, and so on. This is one of the reasons why it is taking so long to implement all of the technological advances that have been made in the agricultural sector over the past few decades," says the professor, and he continues:

"But when you put everything together in a single package in which all units are connected, where autonomous systems talk and exchange useful data all the way through the food chain, and where they are combined with effective decision-making support systems, you start to realise the scale of the perspectives for the agricultural sector in the future." 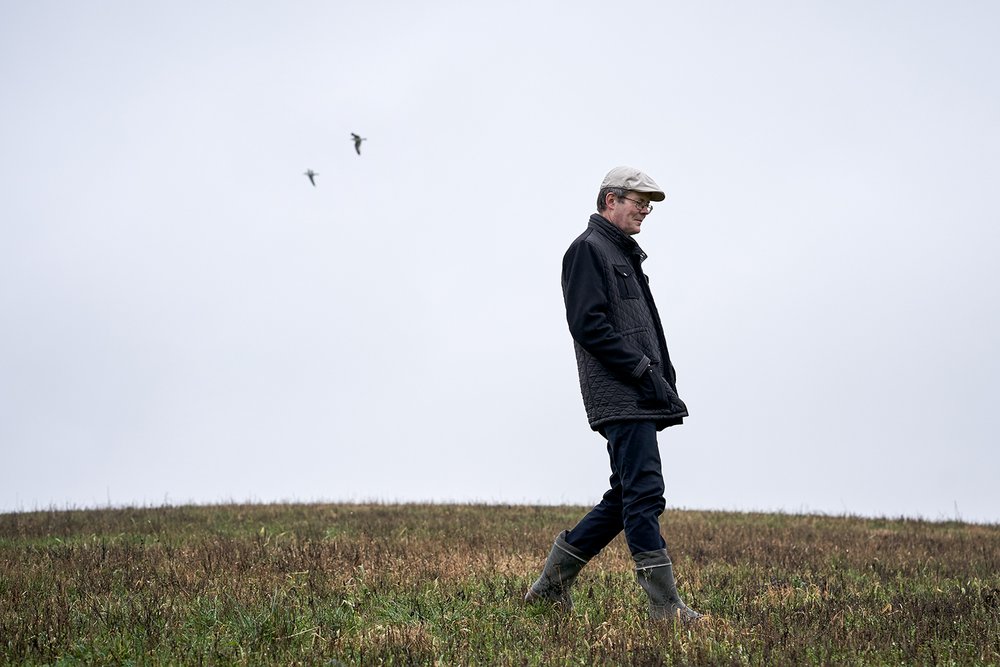 Professor Claus Grøn Sørensen is a qualified agronomist and still works on the family farm in his spare weekends. Photo: Peer Klercke.

Claus Grøn Sørensen is a qualified agronomist specialising in engineering and economics from the Royal Veterinary and Agricultural University of Copenhagen. He grew up on a farm on the Danish island of Funen, and therefore it was only natural for him to take a degree in continuation of his farming background.

"When you grow up with agriculture, it's in your blood," as he says.

Claus Grøn Sørensen was attracted by the combination of theory and practice. From early on, he was curious to dig deeper into the relationship between new technologies and methods in the agricultural sector.

Today, he still works on the family farm in his spare time, but he could see the benefits of digital technologies and the knowledge-based agriculture which has gradually grown up.

Claus Grøn Sørensen is particularly attracted by international work. This has been ever since his first international talk at a conference in Ås in Norway, where, as a green and recent graduate, he presented his early research results for hundreds of experts from all over the world.

He experienced for the first time how research can support sustainable knowledge sharing and fruitful and effective development. And since then, he has nurtured international collaboration and he has been involved in a large number of international organisations, including as the President of EurAgEng (European Society of Agricultural Engineers) and a member of Club of Bologne, a global task-force on the strategies for agricultural mechanisation.

"It has really caught my interest and has helped my research considerably. Knowledge sharing helps make everything so exciting. It keeps the iron hot, if you will. Something happens. You see unprecedented development and progress if, instead of just one person sitting alone and tinkering away in a specialist field, many people join together with a shared interest."

Claus Grøn Sørensen was appointed a professor at the Department of Engineering on 1 April 2020. He has not yet held his inaugural lecture because of the coronavirus shutdown.