Why not combine agriculture and solar energy on the same field?

Using vertical solar-cell installations, researchers from Aarhus University will harvest both energy and crops from the same agricultural area. The plan is to produce energy when it is most needed, while at the same time leaving space for the farmer to work in the field.

Hunsballe Grønt fruit farm is situated in Skælskør on the Danish island of Zealand, and here Claus Hunsballe produces around 800 tonnes of strawberries every year on approximately 30 hectares of land. The farm has a total of 250 hectares of farmland under cultivation, with all sorts of fruit and vegetables. Claus Hunsballe and his family have been doing this for the past 60 years, and he plans to continue to do so.

But he also wants to produce some of the electricity that his farm consumes in pumps, ventilation systems, and so on.

"We’ve got windbreaks around the farm, and I thought it would be a good idea to get more out of them. They’re just standing there, but the optimal for me would be if we could use the surfaces both to shelter the plants and to produce electricity," says Claus Hunsballe.

For this reason, he has joined a major EU project designed to make it possible to grow crops and, at the same time, harvest solar energy from the same field.

The project is called Hyperfarm, and it is being funded by a total of DKK 41.3 million from the EU Framework Programme for research and innovation, Horizon 2020. In addition to Hunsballe Grønt, the development company AgroIntelli and Aarhus University are also taking part from the Danish side.

Energy when it is needed

The focal point of the project is so-called bifacial solar cells; installations that can convert the sun's rays into energy from both the front and the back. Assistant Professor Marta Victoria from the Department of Mechanical and Production Engineering at Aarhus University is in charge of the university's engineering work in the project and she explains:

"Unlike conventional photovoltaic units, these solar cells can be placed with the faces permanently facing east-west. Because of their bifacial properties, they harvest energy from the sun in the morning, as well as in the afternoon and from the late evening sun in the summer. So, we aren’t necessarily aiming to get the most energy out of the solar cells, but rather we’re looking to harvest the energy at the times when there is the greatest need," she says.

In brief, the project will explore the possibility of building rows of 2-4-metre-high vertical "solar cell walls" in fields with different crops. The crops could be anything from grain and beans to vegetables and fruit like Claus Hunsballe's strawberries and blueberries. 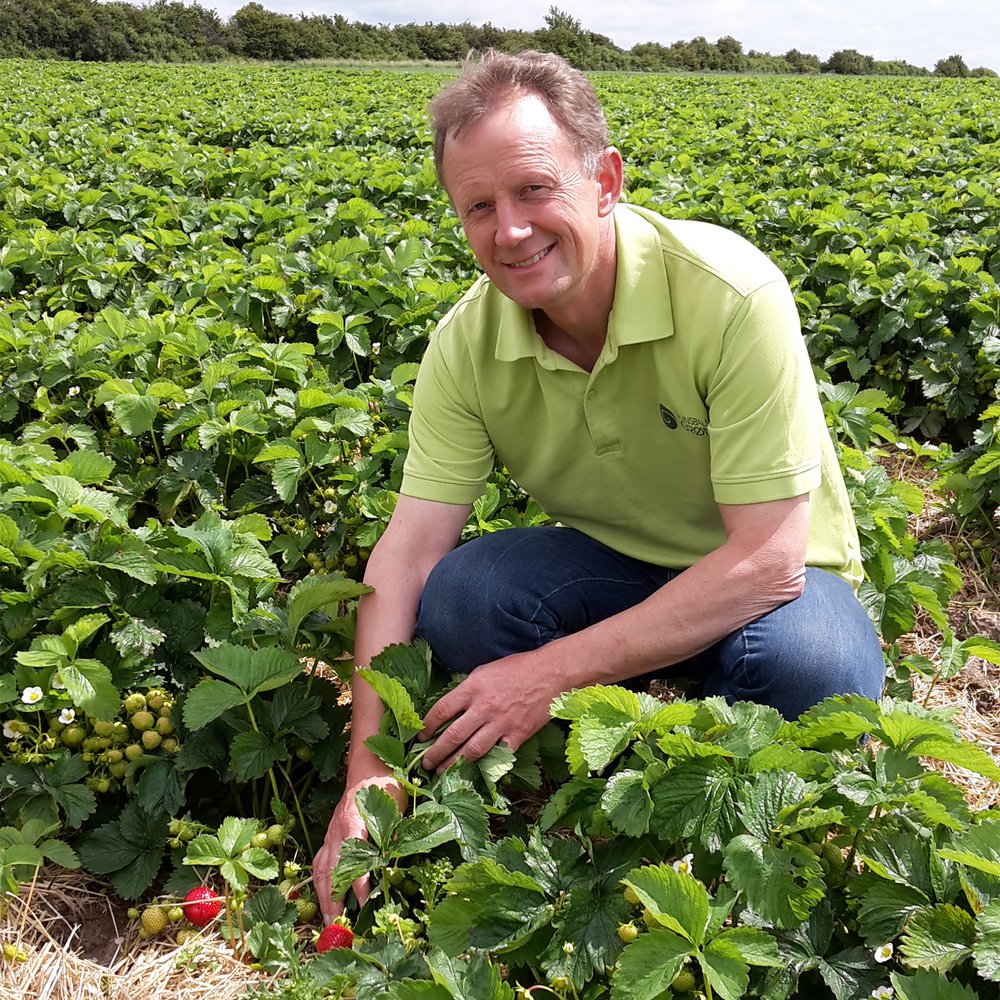 On ordinary grain fields, the rows will be placed 10 metres apart, so that agricultural machines can operate between them. This will optimise the relationship between agricultural and energy production, as the rows will not shade each other.

Windbreaks are important for crops

In addition to energy production, the solar panels will serve as windbreaks for the crops in the field. They will provide shelter from the wind, prevent soil drifting and reduce the water consumption of the crops.

"We know from previous studies that shelter gives approx. 10 per cent higher yields from a field. The project will examine these conditions in more detail and it will test whether there are any further potentials for the crops, for example minimising fungal attacks and the need for pesticides," says Senior Researcher Uffe Jørgensen from the Department of Agroecology at Aarhus University.

Claus Hunsballe would like to see the positive effects too. However, he will just have one row of solar cells in the project. Today, he has an existing 70-metre-long and 4-metre-high windbreak protecting a blueberry field, and this will be replaced with solar panels. Without the windbreak, his berries would look somewhat different:

"There's no doubt that the shelter is very beneficial for our crops. All things being equal, this gives a warmer climate and minimises the damage caused by wind to fruit and berries, etc. Don’t think that the wind just rustles the leaves. It can completely ravage the plants. And plants are more resistant if they’re healthy, so I think that shelter from the wind could minimise disease attacks as well," he says.

The engineering challenge in the project will be to find out how to maximize the solar energy input when the façades face east-west and not just south, which is otherwise normal practice.

"We need to integrate solar energy production better into any given area. In Denmark, most of the land area is used for crop cultivation, and it makes good sense to try to harvest energy in a way that does not affect the crops, but perhaps even has a synergy effect on them," says Marta Victoria.

Claus Hunsballe backs her up:

"We’ve got fantastic agricultural soil in Denmark, and it would be a shame to plaster it all with solar cells. It’d be great if we could unite the two," he says.

Hunsballe Grønt expects to install a new solar cell windbreak in the course of 2021. A demonstration installation will also be built at Aarhus University's research centre in Foulum, where the method will be tested with different crops. In addition, AU will study what citizens and consumers think about different types of solar-cell installation. This particular research will be conducted from the AU MAPP Centre under director Jessica Aschemann-Witzel.

Hyperfarm brings together eleven partners from four different European agricultural countries (Belgium, Germany, the Netherlands and Denmark). The project started at the end of 2020.

This project has received funding from the European Union's Horizon 2020 research and innovation programme under grant agreement no 101000828.