Have you ever thought that the ground beneath you is moving? No? You are probably not the only one, but it actually does, and this is a headache for engineers. However, a new research study will put this right.

Can the ground be treacherous? Yes, in fact it can – to a great extent in the Aarhus area. For example, the ground conditions in the Aarhus Docklands (Aarhus Ø) mean that the Lighthouse residential project has not yet been built and, if there are cracks in the foundations of your house, it is probably also because of the ground beneath. And it was also due to poor ground conditions under the Little Belt Bridge that Banedanmark had to fork out with DKK 200 million to prevent the bridge from collapsing.

If you take a stroll through the city centre, it is by no means hard to spot the impact of the ground conditions on the older apartment blocks in Aarhus, which are often crooked and virtually leaning against each other.

It is not very often that you hear about the treacherous type of soil called clay of high plasticity, which can make tall buildings rise up and bridges sink, and you hardly ever think about that either, according to PhD student Thomas Rye Simonsen. He has just been awarded a prize for his ability to relay his knowledge about precisely clay of high plasticity, which can really cause problems if you build above it.

“In Denmark we don’t have the same major challenges with geological catastrophes you find in other parts of the world, so it’s not very often that this branch of engineering comes to light. In general, however, our geology is incredibly complicated because of the many ice ages. The glaciers have well and truly messed up the layers in the subsurface, but from ground level you’d think it was quite stable. However, it’s not always so, and clay of high plasticity has actually challenged Danish engineers for many decades,” says Thomas Rye Simonsen, pointing out at the same time that – in spite of age-long foundation problems – not very much is known about the behaviour of clay of high plasticity.

“The ground rises when you dig a big hole in the ground for purposes such as a parking basement. We know this for a fact. We’re just not quite sure of why it happens or how much. We have some theories about it, but still lack a full-scale experiment to expand our knowledge in this area,” he adds. 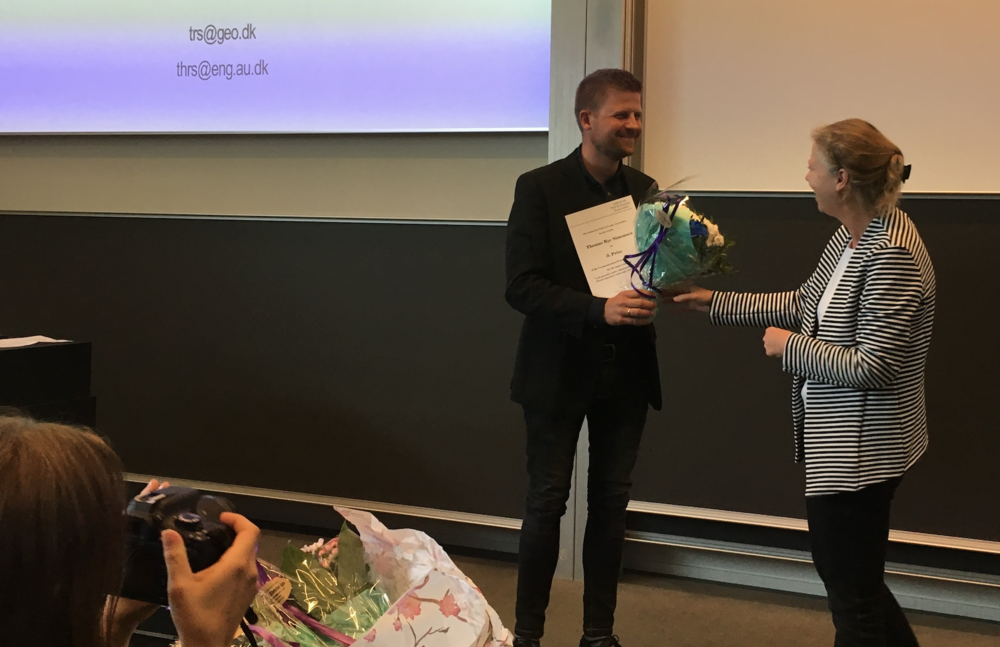 Thomas is awarded his third place at the Industrial PhD and Postdoc Association’s prize-giving ceremony.

However, this is what Thomas is now working on with his research project. Using advanced measuring equipment installed at a depth of up to 30 metres, he can actually record the negative pressure that occurs when the weight is relieved from clay of high plasticity, just as he can very accurately measure the extent to which the clay heaves. However, there is also the simple problem with his experiments that it takes time for the ground to heave. A very long time, in fact. It takes about a century before the bottom of the excavation perhaps rises 20 centimetres. And that is not exactly something that makes understanding easier.

“I work with things that develop extremely slowly. This is also some of what makes it difficult to understand and especially to deal with in a PhD project with a time frame of just three years! But when we build houses and large constructions, they should also last for at least a century. We therefore need to be sure of the way the ground develops during this time,” says Thomas, who hopes that his research can help open people’s eyes to ‘that thing about the ground’ being really important.

Thomas Rye Simonsen graduated as a constructional engineer in Aarhus in 2005, after which he took advanced studies to complete his MSc in Technical Geology at Aarhus University.

He graduated in 2008 and has worked for Geo ever since. He commenced his Industrial PhD for Geo in 2015.

The prize was presented on 28 June 2017 at the IT University of Copenhagen. His article will soon be published in Danish at Videnskab.dk.