Study: Urban noise does not seem as loud when we look at nature

Two MSc Eng students from Aarhus University have set out to examine the correlation between what people see and what they hear. Using VR technology, they have discovered that looking at nature seems to dampen our hearing.

Does what we are looking at play a role in how we experience sound?

The conclusion in a new Master's thesis by two engineering students from Aarhus University is ‘yes indeed’.

By recording urban noise and 360-degree videos, and then placing a number of test subjects in a virtual apartment environment, they have been able to determine, with statistical certainty, that what you look out at through a window is actually significant for how noisy you perceive the background sound from the city.

The study is the first of its kind, using VR to investigate the correlation between what people in a dwelling see and what they hear. And the conclusion is clear:

"We put people in different virtual apartments, with a view out to a busy road, a railway track, buildings or a park. Then we asked about how they experienced the sound level. Even though the level was exactly the same, we could conclude with statistical significance that people experience a lower level of noise if they’re looking at nature, than if they’re looking at a congested road," says Christina Poulsen who, together with her study partner, Elisabeth Granzow Larsen, is behind the Master's thesis. 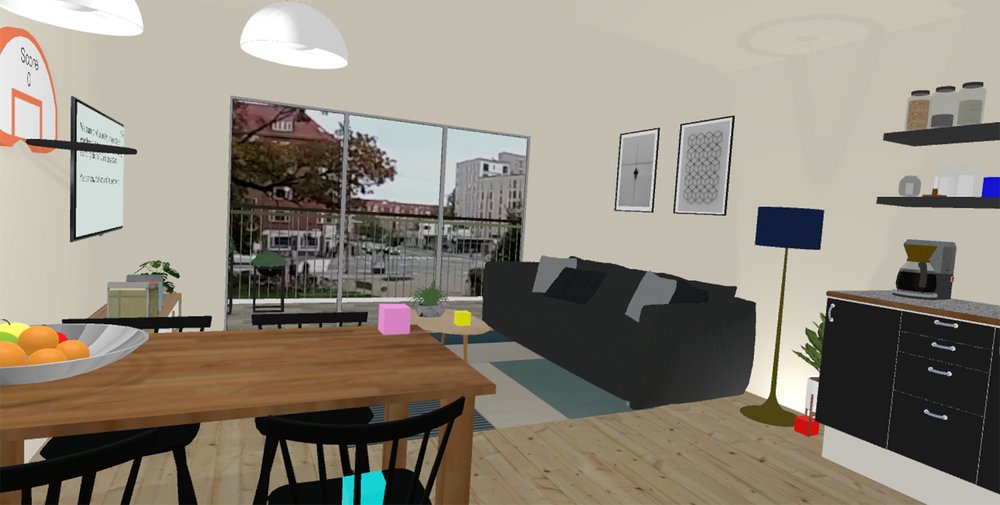 Example of a simulated livingroom with a view to the city. Photo: Elisabeth Granzow Larsen and Christina Poulsen.

A total of 61 test subjects went through a virtual environment created by the two students for the study. Each test person was given VR equipment, including headsets, so that they were completely immersed in the situation.

Prior to the experiment, Christina and Elisabeth had recorded 360-degree videos and sound at two locations in Aarhus. One recording was a view of a busy road, and one was a view of a railway. The two students then installed the recordings as the view from different virtual apartments and put the test subjects in all the scenarios in random order.

"Afterwards, we asked them about their subjective preferences in relation to which sounds and views they liked best, for example. And many thought that there was less noise when they were looking at something green compared with looking at traffic," says Elisabeth Granzow Larsen.

She believes that knowledge from the project could be used in future urban planning.

"In general, views of nature mean that people experience a lower urban sound level, and this should be taken into account in new buildings. Where should you place the windows, so that you see as much nature as possible? When constructing new buildings in a city, it’s often impossible to completely avoid urban noise. But we can alleviate the problem by taking a holistic approach to urban planning," she says.

The two engineering students found their inspiration for the project when they fell across several other studies, showing that visual input could have an impact on perceived sound levels. For example, it has been demonstrated that people experience the sound of a train as louder if the train is red, compared to a green train.

"This is the first time anyone has looked at this link using VR. We spent a lot of time making our study as objective as possible, but our results are still just an indication of how things are related. We hope that others will take our study further, because there are certainly some interesting discoveries in it," says Christina Poulsen.

Associate Professor Steffen Petersen was the principal supervisor on the Master's project, and he believes that there are a lot of interesting perspectives that should be included in future construction projects.

"The study by Elisabeth and Christina means we know a little more about what’s happening when people move round in buildings. They’ve shown that what you see and what you hear affect each other. Therefore, it’s very important that we don’t design and locate windows in housing on the basis of single experiences and perceptions. Instead, we should think about how all our senses interact and are affected by different design variables," he says.

This is what they did