The hunt is on: using machine learning, we’re looking for completely new antibiotics in national parks

In about 20-30 years, bacterial resistance will be so serious that it will cost more lives than cancer, even in the West. This is the gloomy prophecy from the World Health Organization (WHO), and they are beating the drum for active, targeted efforts to find new antibiotics. A researcher from the Department of Engineering at Aarhus University has had an idea that could help solve this enormous problem.

The situation is serious, because not only is modern society hugely dependent on antibiotics, it is also becoming increasingly difficult to find new ones.

Assistant Professor Thomas Tørring from the Department of Engineering at Aarhus University has therefore started a new research project in which he will combine artificial intelligence and image recognition with soil samples from national parks all over the world to find new medicines in nature's own medicine cabinet.

"If you go outside and take a spoonful of soil from your back garden, just that one spoonful will contain millions of bacteria. In fact, there’ll be bacteria among them that are able to produce several of the antibiotics we know today. This was historically almost the way we found new antibiotics," he says, adding that these days are long gone.

"Virtually all the classes of antibiotics we have today were found 50 or more years ago. Finding a new antibiotic today is a rare event. It happens only perhaps every 10-15 years."

However, Thomas Tørring hopes to be able to change this with his new project, in which he will couple modern computer technology with biotechnology in search of antibiotics.

Needle in a haystack

"Bacteria are used to living in natural environments with millions of other bacteria and microorganisms that we may not know about. They live in environments with completely different combinations of nutrients than we can reproduce, so when we take them into the lab and grow them in controlled conditions, many bacteria will not grow. Therefore, for good reasons, we’ve never really taken a closer look at these bacterial colonies, but now we will," he says, and continues:

"We desperately need new antibiotics, but finding them in nature is like finding a needle in a haystack. In this project, we’ll be building an incubation chamber that uses image recognition and machine learning to identify the most promising bacterial colonies.”

Students from his research team have visited seven Natura 2000 national parks in Denmark to take soil samples. The group is now in the process of isolating the bacterial flora from the various sites, and it is anticipated that the diverse nature in each of them will be able to contribute unique bacterial species.

Building new tech for the world

"In the old days in the 1960s and 1970s, it was common practice in large companies in the pharmaceutical industry for employees to return from business trips with a bag of soil which could be used to find new antibiotics," says Thomas Tørring and continues:

"Our plan is slightly different. We want to build a setup, which is cheap to produce and which can be used by researchers all over the world. An alternative to the extremely expensive apparatus we otherwise use in pharmaceutical technology in the West. I want to build something that can be used in Third World countries. Perhaps we could send 20 boxes down to a national park in Ghana or somewhere, so this treasure hunt can take place all over the world, and by researchers who may not have DKK 2 million or so for new, expensive equipment. We want to go back to basics, but at the same time use the very latest computer- and biotechnology." 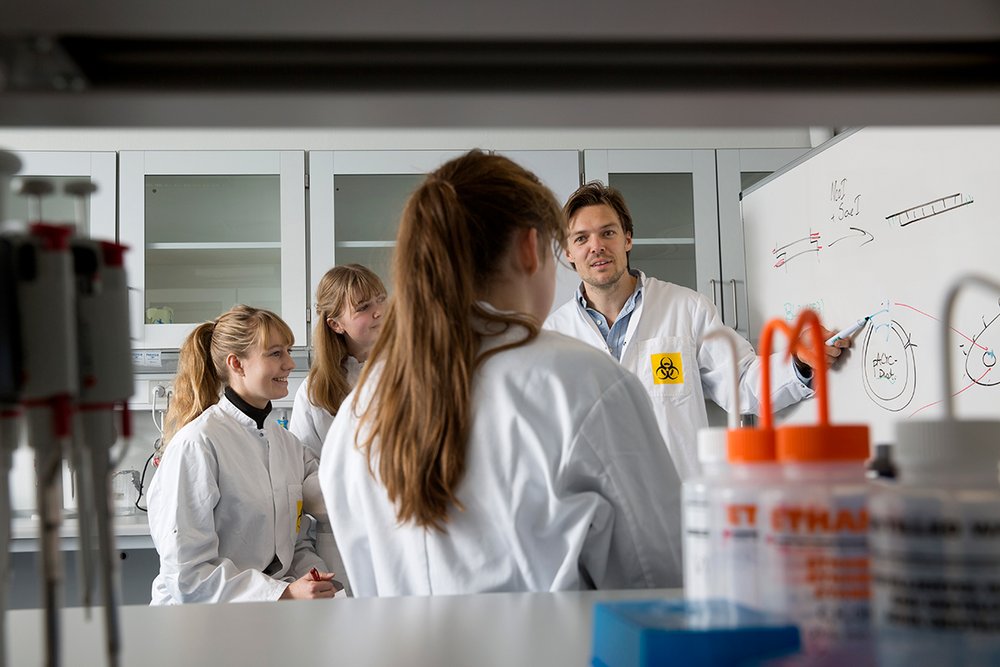 Instead of having scientists compare thousands of petri dishes and compare bacterial colonies, the computer will take over. It will also be able to pinpoint interesting correlations that the human eye will never be able to spot. Photo: Lars Kruse / AU Foto.

The idea now is to take pictures of bacterial colonies collected from Denmark and in time from the whole world, and put them all together in one large database. Via artificial intelligence, using image recognition, a computer could identify rare and therefore interesting colonies.

"If I have a petri dish and sit down and look at it, I can easily see the difference between the individual colonies. But if I have 20,000 petri dishes, could I compare a couple of colonies I found in the first petri dish with number 15,000? It’s not humanly possible, but the computer can help here to draw out some of the correlations that we know will be there when we look at a large data set. We’ll be using the artificial intelligence to pinpoint the colonies which could be interesting. These could perhaps be colonies that only very rarely show up on petri dishes," he says.

Antibiotics are molecules which either inhibit or kill microorganisms. The best known antibiotic is penicillin, which was discovered by accident in 1928 at St. Mary's Hospital in London.

The bacteriologist Alexander Fleming was experimenting with petri dishes with staphylococci bacteria when he accidentally contaminated a sample with mould. He observed how the bacteria could not grow near the mould, which was later identified as Penicillium notatum.

The discovery generated a veritable Klondike for researchers from all over the world. There was a race to find new types of antibiotics that could help humanity against various diseases. The gold rush culminated in "the golden age" of antibiotics in the period from the 1950s to the 1970s.

Many large pharmaceutical companies have even pulled out of the struggle to find new antibiotics. It is simply too difficult, and there is no good financial incentive. The price structure for antibiotics simply means that, even if you discover an entirely new antibiotic that can kill all diseases, it would take far too long for the product to be first choice at hospitals etc. worldwide. A cancer treatment or drug to lower blood pressure can quickly become a profitable business, but not antibiotics.

But there is a huge need for new antibiotics, if society as we know it today is to survive.

The research group under Thomas Tørring has collected soil samples from seven national parks in Denmark, all of which are protected under the common European nature conservation project, Natura 2000. The sites are at

After the team has isolated thousands of soil bacteria from these locations, the plan is to create large-scale image material of the colonies. Afterwards, all the data will be fed into an artificial intelligence to help find visual patterns in the colonies that can hopefully be used to find new antibiotics.