A new research project at the Department of Engineering, Aarhus University, will develop highly efficient, but inexpensive, components in flow batteries. The aim is to disrupt the field of stationary batteries, which are necessary for the transition to a green energy system.

Flow batteries are cheap and robust, and over the past five years, the fluid-based battery technology has undergone rapid development.

With a grant of DKK 11 million (EUR 1.5 million) from Innovation Fund Denmark, a handful of researchers have started a new project to pave the way for the next generation of flow batteries, which are crucial for the renewable energy system of the future. The focus of the project is the so-called stacks that are one of the main components of flow batteries.

"The project is looking at a very important and specific component in a flow battery, and there is great potential for optimisation. The component is called the stack, and the project will attempt to upgrade this so that it will have significantly higher efficiency and significantly lower price," says Professor Anders Bentien, who is an expert in flow batteries at the Department of Engineering, Aarhus. University.

The technology behind flow batteries originated in the 1980s and it works by storing electricity in liquids, usually an aqueous vanadium solution primarily consisting of sulphuric acid and vanadium.

In principle, a vanadium flow battery works by pumping two separate, but identical, vanadium liquids into the stack. When the liquids are charged, electrons are emitted and absorbed in the two liquids, thereby achieving different oxidation stages. 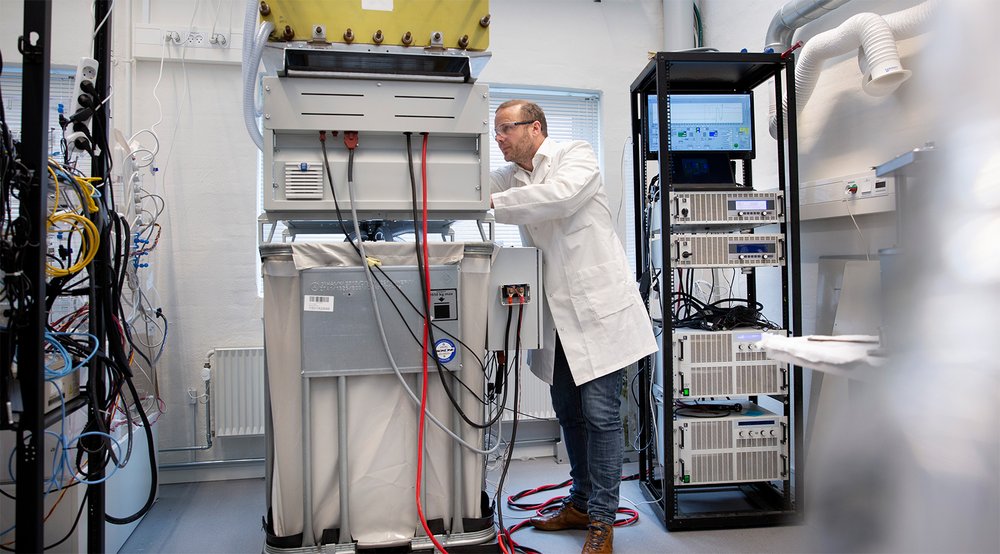 "In the project, we want to develop new membranes and optimise the geometric design of the stacks to make flow batteries both cheaper and more sustainable," says Professor Anders Bentien. Foto: Lars Kruse, AU Foto.

The energy density of flow batteries is lower than for the lithium-ion batteries we know from mobile phones, for example, but they have a much longer lifespan. Moreover, the technology is relatively inexpensive, and the battery cannot catch fire. It is also very easy to recycle vanadium, as the same liquid is used on both sides of the battery.

This makes flow batteries very suitable for storing solar and wind electricity, and the new project aims to reduce the price further.

"The overall goal for stationary electricity storage is to achieve a levelized-cost-of-electricity-storage below EUR 0.05 per kWh per cycle, as this is considered to be the disruption threshold for storage of renewable electricity in batteries," says Anders Bentien, and he continues:

"The stack constitutes a significant part of the total cost of a flow battery, and a more efficient stack will therefore enable cost reductions. Over the past five years, there have been no significant improvements in stacks. The material consumption and weight are still the same at about 30 kg per kW. In the project, we want to develop new membranes and optimise the geometric design of the stacks to make flow batteries both cheaper and more sustainable."

The project is headed by Professor Anders Bentien at Aarhus University. Partners in the project are DTU Energy (Technical University of Denmark), Korea Institute of Science and Technology (KIST) as well as the companies VisBlue and Danish Power Systems, which manufacture flow batteries and membranes for stacks, respectively.