Aarhus University is the first Danish university to join the Tiny Earth global crowdsourcing initiative which, with the help of teaching staff and thousands of students all over the world, is trying to combat antibiotic resistance.

Sleet and rain pour down over the soft, brown forest floor in the approx. 80 hectare Riis Skov, Denmark's first public forest, squeezed in between the Port of Aarhus, Trøjborg and the Risskov urban district.

A group of second-semester engineering students from Aarhus University defy the slush, wind and cold, and in their red, blue, green and black rain jackets, they go out among the young wild garlic that, with their almost lime-green colour, remind them that spring is just around the corner.

The students have a noble purpose: To find new antibiotics. And there’s no time to lose, because resistance to antibiotics is an increasing global problem. The World Health Organisation has forecast that it will kill just as many people as cancer in 2050. Even today, more than 25,000 Europeans die prematurely every year as a result of infections caused by bacteria that have developed resistance to antibiotics.

"It's pretty exciting to be part of the initiative. You can relate to the issue, and it’s vital we find new antibiotics, because otherwise we’ll be facing a future in which diseases we can cure easily today with penicillin can become very serious. And it's fun to delve into the theory we learn and then to help set up an experiment," says Grith Skovborg, who with two fellow biotechnology students, Caroline Christensen and Maria Mathiasen is collecting soil samples for later examination for possible interesting new antibiotic-producing bacterial colonies. 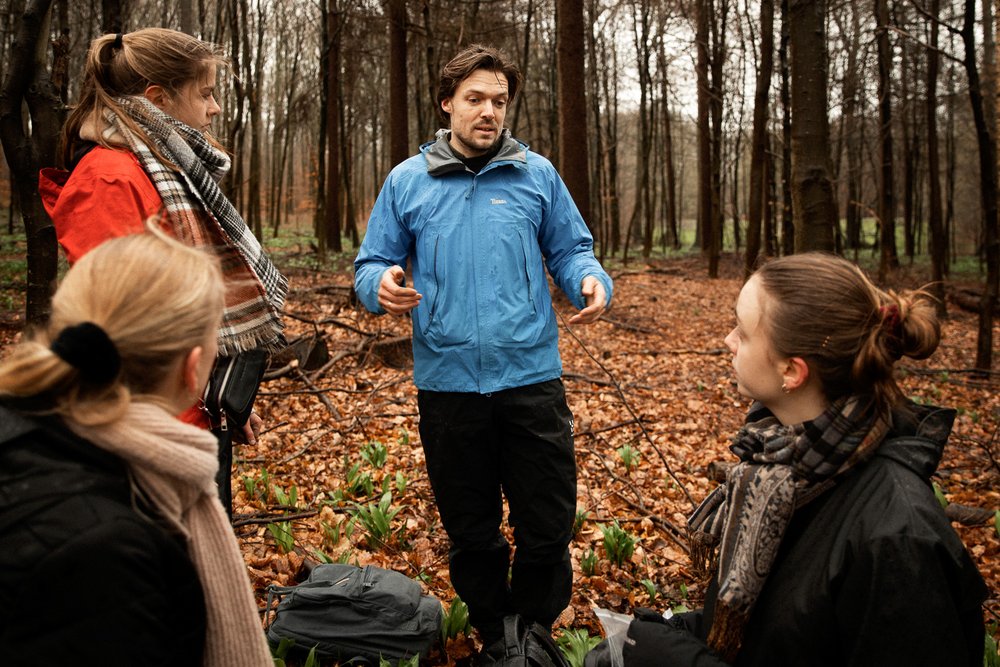 The rain-soaked group of just under 20 people, tramping around among shrivelled autumn leaves and glistening wet beech trees in February to gather undisturbed soil samples from depths of 30 centimetres, is not alone.

Together with thousands of others, they are part of the world-wide Tiny Earth initiative, in which researchers, teachers and students from all over the world are joining forces to find new antibiotics.

However, this is the first time that Danes are participating in the project explains Thomas Tørring, assistant professor at Department of Engineering at Aarhus University, who hopes that the trend will spread: 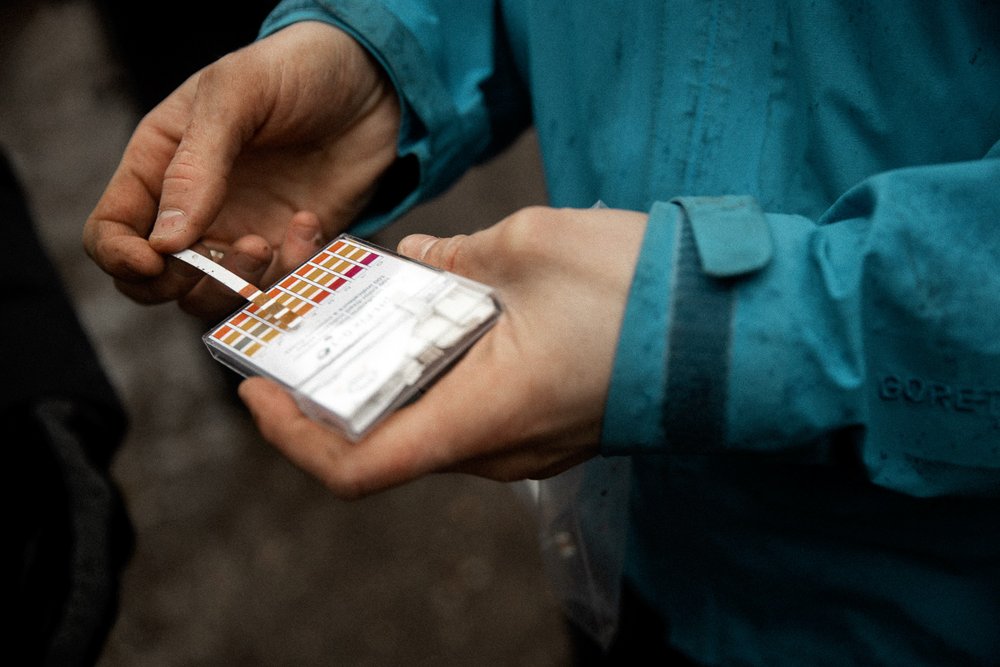 Preliminary tests are carried out in the field before the samples are taken into the laboratory, where researchers will investigate bacterial colonies for new unknowns. Photo: Melissa Yildirim, AU Foto.

In parallel, Thomas Tørring's research group is developing a special technology to accelerate the discovery of new antibiotics. By means of artificial intelligence and image recognition, the group is trying to scan bacterial colonies for possible new antibiotics far more quickly than normal, where each individual sample has to be examined manually.

The technology may also be able to spot interesting patterns in colonies that may otherwise be overlooked.

"Virtually all the classes of antibiotics we have today were found 50 or more years ago. Finding a new antibiotic today is a rare event. It happens only perhaps once every 10-15 years. This is a problem, because we desperately need new antibiotics," he says.

Therefore, he hopes that many more people will take part in the project, and he sees great potential in Danish high school students in the search for the medicine of the future.

"Generally, the whole project is about attracting young people to learn about the crisis we’re facing, and to take part in the hunt themselves. We have to solve the problem through crowdsourcing like this Tiny Earth project, because there’s no money to find new antibiotics," says Frederikke Dybdahl Andersen, a research assistant in Thomas Tørring’s research group.

Antibiotics are molecules which either inhibit or kill microorganisms. The best known antibiotic is penicillin, which was discovered back in 1928 by accident by Alexander Fleming at St. Mary's Hospital in London. 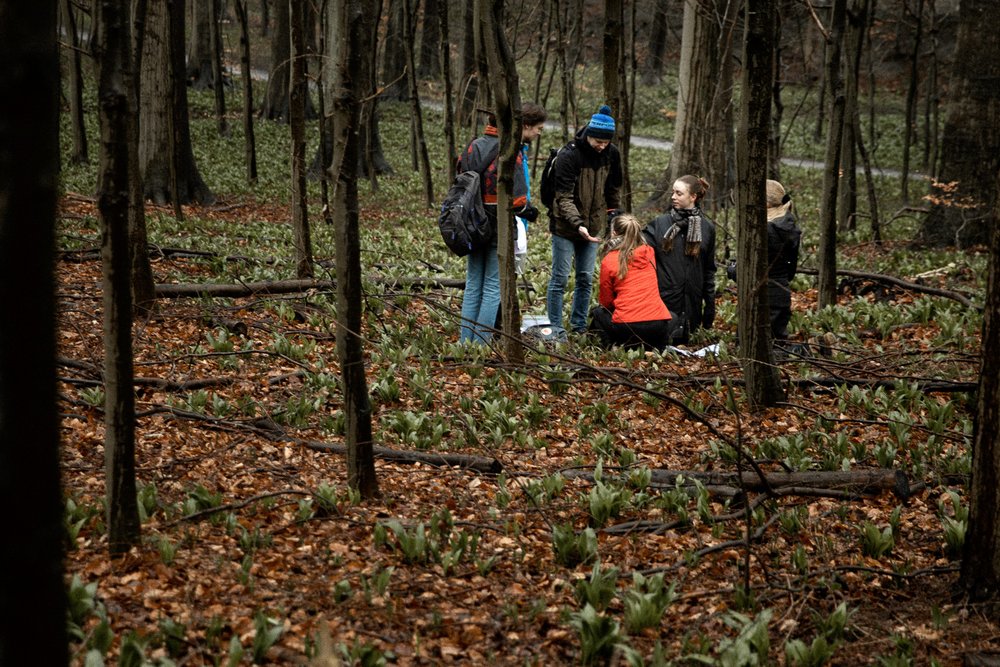 This time, Riis Skov was the target for the students, but also other of Aarhus' forests will be searched for antibiotic-producing bacteria. Photo: Melissa Yildirim, AU Foto.

Many of the major pharmaceutical companies have withdrawn completely from the struggle to find new antibiotics, because it is simply too difficult, and because the financial incentive is not very strong. The price structure for antibiotics simply means that, even if you discover an entirely new antibiotic that can kill all diseases, it would take far too long for the product to be the first choice.

New antibiotics are crucial for the future of our society, but they are no honey pot.

"That's why it's important that we get pupils and students on board from all over the world. In addition to there being a whole lot of learning in it, we may actually find something completely new, and with an enormous impact for millions of people all over the world," says Frederikke Dybdahl Andersen.

Tiny Earth was launched in June 2018, and it is a global crowdsourcing initiative bringing together thousands of researchers, teachers and students at different educational levels to find new antibiotics in nature around the world.